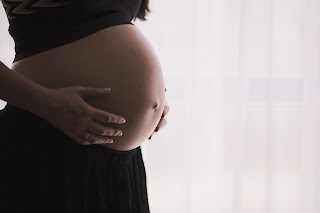 Pregnancy, also known as conception, is the time during which one or more offspring develop inside a woman. A woman is considered pregnant when fertilization occurs, leading to the development of one or more fetuses in the mother's womb.

The eggs live in the ovaries, and the hormones that control your menstrual cycle mature a few eggs each month. When your egg matures, it means that it is ready to be fertilized by a sperm cell. These hormones make the lining of your uterus thick and spongy, making your body ready for pregnancy.

About half through your menstrual cycle, a mature egg travels through the ovaries - called ovulation - and the fallopian tube toward your uterus.

The egg hangs out for about 12–24 hours, moving slowly through the fallopian tube to see if any sperm is around.

If semen is found in the vagina, sperm cells can float through the cervix and uterus and into the fallopian tube, looking for eggs.

If a sperm cell attaches to your egg, the fertilized egg moves down the fallopian tube towards the uterus. It starts dividing into more and more cells, forming a ball as it grows. The ball of cells (called a blastocyst) reaches the uterus approximately 3-4 days after fertilization.

The ball of cells floats in the uterus for another 2-3 days. If the ball of cells attaches to the lining of your uterus, it is called implantation - when pregnancy officially begins.

When a fertilized egg is implanted in the uterus, it releases pregnancy hormones that prevent the lining of your uterus from shedding - which is why people don't get periods when they're pregnant. If your ovum does not mate with sperm, or a fertilized egg does not implant into your uterus, the thick layer of your uterus is not required and it leaves your body during your period. Up to half of all fertilized eggs are not naturally implanted in the uterus - they exit your body during your period.

You may notice some signs and symptoms even before the pregnancy test. As your hormone levels change, others will show up weeks later.

A missed period is one of the earliest signs of pregnancy (and perhaps the most classic one). However, a missed period does not necessarily mean that you are pregnant, especially if your cycle becomes irregular. Apart from pregnancy there are many health conditions that can lead to delayed or missed periods.

Headaches are common in early pregnancy. They are usually caused by altered hormone levels and increased blood volume. If your headache is not going away or is particularly painful, contact your doctor.

Some women may experience mild bleeding and spotting in early pregnancy. Transplantation usually occurs one to two weeks after fertilization. Early pregnancy bleeding can also occur from relatively mild conditions such as infection or irritation.

You can expect to gain between 1 and 4 pounds in the first few months of pregnancy. Weight gain becomes more noticeable towards the beginning of your second trimester.

Hormone changes during the early pregnancy can slow down your digestive system. As a result, you may become constipated.

The biggest cause of back pain in early pregnancy is stress on muscles and muscles. Later, your increased weight and shifted center of gravity may be involved in your back pain.

There is an increased risk of anemia in pregnant women, causing symptoms such as swelling and dizziness. The condition can lead to premature birth and low birth weight.

15 to 24 percent of all pregnant women develop depression during pregnancy. Many of the biological and emotional changes you experience can be contributing causes.

Insomnia is another common symptom of early pregnancy. Stress can be caused by physical discomfort and hormonal changes. A balanced diet, good sleeping habits and yoga stretches can help you all get a good night's sleep.

Before you are good enough for a positive test, your breasts may start to feel tender, swollen and usually heavy or full. Your nipples may also become larger and more sensitive, and the areola may become dark.

Morning sickness is often the first sign that you are pregnant. Hormone increases are the main reason during early pregnancy.

Hip pain is common during pregnancy and increases in late pregnancy.

Diarrhea and other digestive problems often occur during pregnancy.

A breech pregnancy occurs when the baby is head-up into the woman's uterus and the buttocks or legs closest to the cervix. Many babies get up early in pregnancy, but most of them change to a head position at the end of pregnancy. Breach includes three different types of birth, complete breech, frank breech, and incomplete breech (foot breech).

A chemical pregnancy is a clinical term for pregnancy loss that occurs immediately after implantation. It is preceded by an ultrasound that can detect the fetal heartbeat. In chemical pregnancy, an egg was fertilized and implanted in the uterus, but then could not develop for some reason.

Dilation and Curettage (D & C) is a surgical procedure that expands (expands) the cervix of the uterus, allowing the uterine lining (endometrium) to be stained with a diuretic (spoon-shaped device). D&C is a form of treatment for a variety of conditions including abnormal menstrual bleeding, incomplete abortion, polyps, surgical abortion, uterine infection and uterine cancer.

An ectopic or tubal pregnancy is a pregnancy that lies outside the uterus (womb). It occurs when an egg fertilized from the ovary does not reach the uterus or implant itself. Early treatment that may include both surgery and medication reduces the risk of complications. The most common symptoms of an ectopic pregnancy are abdominal pain and vaginal bleeding.

Women who have male sexual partners should consider birth control if they are not interested in becoming pregnant. Talk to your doctor about birth control which is right for you.

Intrauterine devices (IUDs) do most of the work by stopping fertilization. They are currently the most effective form of birth control. The downside is that they do not prevent sexually transmitted diseases (STDs).

Birth control pills, patches and vaginal rings work by controlling the level of hormones in a woman's body. They are available by prescription. Tasks that reduce the effectiveness of these methods include forgetting to use them as prescribed. Effectiveness rates that refer to "specific use" account for this type of human error. Other forms of hormonal birth control include patches and vaginal rings. They are also available by prescription, and their effectiveness rate is similar to that of the pill.

Condom and other barrier methods

Condoms, diaphragms and sponges are convenient and inexpensive forms of birth control that can be purchased without a prescription. They are most effective when used correctly each time you have intercourse. If you are dependent on these blocking methods to avoid becoming pregnant, consider using an additional method of contraception such as a spermicide or birth control pill. Other inhibition methods include diaphragms and sponges. These can be purchased without a prescription.

Many morning pills are available, both over the counter and on prescription. Instead, they can act as a backup if you have unprotected sex or forget to use birth control on your regular basis. They must be used within 120 hours (five days) of sexual contact to be effective. Some pills are most effective when taken within 72 hours (three days).

Natural family planning (NFP), or fertility awareness, is the birth control method with the highest failure rate. With NFP, a woman tracks her menstrual cycle to predict when she will ovulate. He would then avoid intercourse during his fertile window. Accidental pregnancies can occur because there are many variables that affect a woman's cycle from month to month.
Advertisement